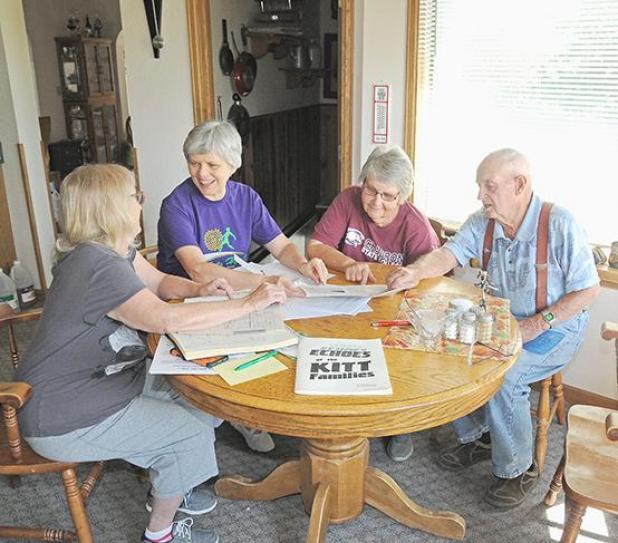 Family reunion and genealogy work continues at the Bob Kitt home near Wauneta ahead of the Kitt 125th Celebration to be held during Wauneta’s annual Harvest Festival. Bob is joined by his cousins Maxine Smith of Wyoming, Cheryl Bryan of Imperial and Marla Smith of Imperial. The four are all grandchildren of Ray and Hilda Kitt.

From far flung places across the United States-—New York, Virginia, Florida, Texas, California, the Pacific Northwest—and many points in between, the descendants of John Chiles and Sarah Kitt will celebrate their Nebraska roots during Wauneta’s Harvest Festival.

As these descendants celebrate their common heritage during Harvest Fest, the Kitt family will also be honored as grand marshals in Wauneta’s Harvest Fest Parade, a nod to the family’s 125-year connection with and commitment to the community of Wauneta.

The family reunion will be based out the Wauneta Senior Center Friday and Saturday and friends and extended family members from other branches are encouraged to stop by and say hello.  Special music will also be provided by members of the Kitt family during Sunday morning worship services at the Wauneta United Methodist Church, with church beginning at 10:30 a.m. MT/11:30 a.m. CT.

The Kitt family moved to southwest Nebraska 125 years ago with all they had—including their eight oldest of an eventual nine children—looking for new opportunities in the young state of Nebraska, which had been admitted into the Union just 25 years prior.

The Kitts purchased a homestead relinquishment in 1892, with John C. coming west from Iowa to procure the land. Sarah, expecting their eighth child, remained behind with her children.

Sarah died in 1935 at the age of 83. John C. died in 1942, shortly after celebrating his 92nd birthday. They are buried together at the Mt. Zion Cemetery in the Calvert Precinct of Dundy County. But their legacy lives on through their descendants, which number in the hundreds. Including John C. and Sarah, there have been seven generations of Kitt lineage to call Wauneta home. Across southwest Nebraska those descendants, in addition to the Kitt name, carry other names well-known in the area like Hohl, McCallum, Denker, Schwenk, Smith, Theobald, Fanning, Hohnholt, Hunt, Kuenning, Busking, Janicek, Kramer, Spady, Brunkhorst, Keiser, McNair, Sandman, Koetter, Johnson, Henning, Cowles, Levy, Litz, Wells, Spahn and Chilewski among others.