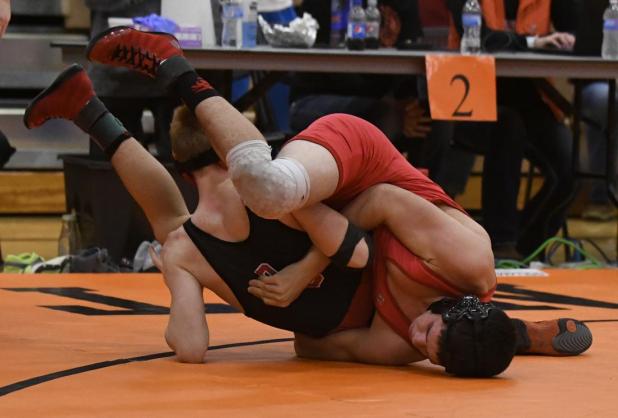 Colton Barrett, shown at the Jan. 14 Chase County Invite, was one of three Wauneta-Palisade wrestlers that took part at the RPAC Tournam

Wins were tough to come by for Wauneta-Palisade wrestlers at Friday’s RPAC tournament.

That proved true as WP was only able to pick up one win on the day.

Evan Nordhausen lost all five matches in the 106-pound class, but Schluckebier said Nordhausen showed improvement at the meet.

Colton Barrett opened his day with a win in his 138-pound bracket. Barrett lost his next two matches before being injured in his fourth match of the day. Schluckebier said Barrett was doing well in the match before the injury derailed Barrett’s day.

“Willis likes to have fun but  works very hard at the same time,” Schluckebier said.

Following the meet, Schluckebier said there wasn’t any sitting and waiting Friday. The day went fast with many matches going the full six minutes, according to Schluckebier. The long matches eliminated the need to wait 45 minutes between each wrestler’s matches.