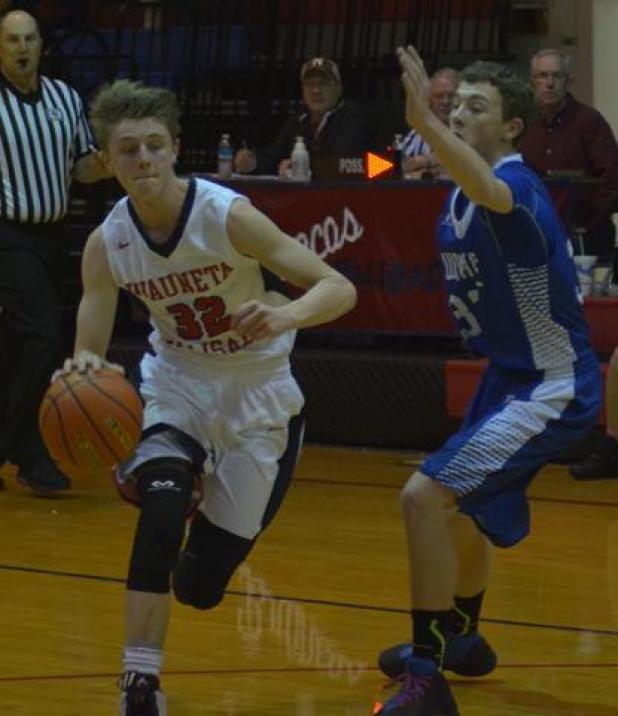 Duncan Rector drives to the paint at home Friday against Wallace. Wauneta-Palisade wrapped up it’s RPAC tournament appearance with a 57-51 win over the Wildcats.

Although it wasn’t the ending the Wauneta-Palisade boys’ basketball team wanted for the RPAC tournament, the Broncos took home a win in its final tournament game.

WP had to wait an extra day due to weather for its second round matchup against Dundy County-Stratton.

Both teams started slow offensively. WP didn’t make it’s first points, a three-pointer by Dennis Cavanaugh, until the five-minute mark. The Broncos got rolling after that and thanks to a Greg Gaston three-pointer with two seconds left, held a 16-15 lead at the end of the first.

The margin remained three through the first half of the third quarter before WP went on a 6-2 run and led 40-33 heading into the final stanza.

DCS quickly closed the margin with baskets on its first three possessions then took its first lead with 4:33 left in the game. WP regained the lead, 42-41, on a Gaston bucket, but WP was outscored 4-8 down the stretch of the 46-49 loss.

WP made two of eight free throws while DCS was 13-26 from the charity stripe.

The Tigers went on to win the RPAC championship.

“Overall, we have to be disappointed by sitting at home during the RPAC finals,” Kuhlen said. “We had our game with DCS in our hands and played the fourth quarter not to lose instead of playing to win. Once we get the killer instinct, we will be pretty tough to beat.”