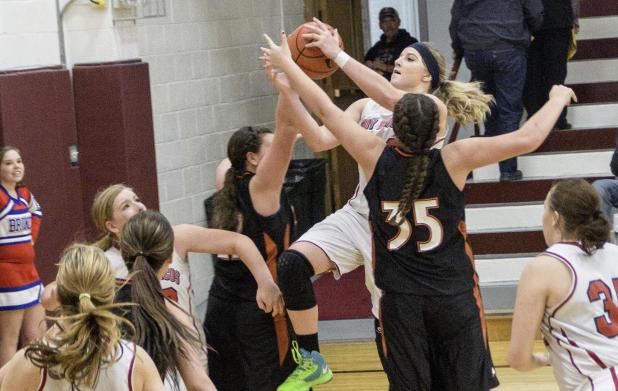 WP falls to Wallace in second round of RPAC tourney

The Wauneta-Palisade girls’ basketball team split games with Hyannis and Paxton last week before beating Maxwell in the first round of the RPAC tournament.

WP opened the week Tuesday, Jan. 17 with a makeup game against Hyannis.

“We dug ourselves an early hole from the get go, then did a nice job fighting our way back,” said WP Coach Matt Cox.

Cox credited his team with having stretches when it played well, but hopes to see the Broncos put complete quarters together as the season goes on. Cox added that Hyannis was a very good team and it’s fast style of play is what WP wants to look like going forward.

The Broncos trailed 13-16 at the end of the first quarter, but took an 31-21 advantage to the locker room at halftime.

“We got started a little slow tonight, but I thought our defense played well all game long,” Cox said. The Broncos held Paxton to 19 second half points.

Cox said it was nice having three girls in double figures and WP will need to continue that trend.

Playing its third game in five days, WP held off sixth seeded Maxwell in the first round of the RPAC tournament.

The teams traded points early before WP took a 16-12 lead at the end of the first quarter.

Cox said Maxwell has a very good defensive game plan and WP really struggled in the second and third quarters shooting the ball.

After a Maxwell basket with 35 seconds left in the first half, WP trailed 18-21 at halftime and fell behind 21-28 midway through the third quarter. WP closed the gap and trailed 26-28 at the end of the third.

“The girls really kicked it up a gear in the fourth,” Cox said. “Our defensive effort was tremendous and it was the difference in the game.”