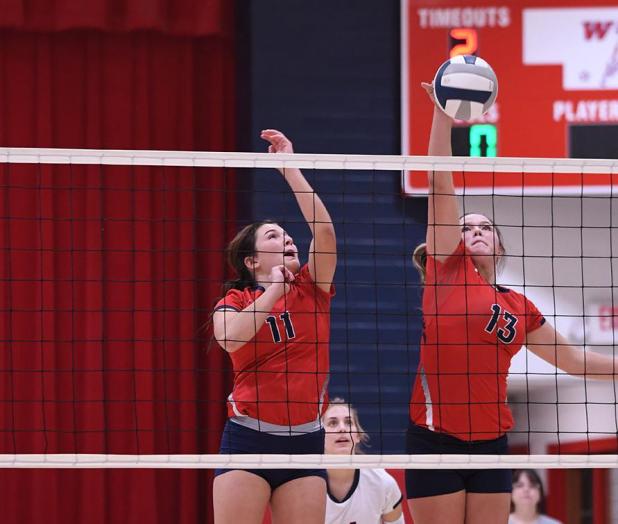 Peyton Cox (13) tips a ball back to Hitchcock County as Payton Yearous (11) backs her up during Wauneta-Palisade’s sweep of the Falcons in the second round of the RPAC tournament.

While the RPAC tournament didn’t finish the way the Wauneta-Palisade volleyball team would have hoped, the Broncos won the first round of subdistricts Monday against Medicine Valley and set up a rematch with undefeated Maywood/Hayes Center Tuesday.
Playing at Hayes Center, WP took the first set 25-16. The Broncos finished off the set with a Payton Yearous block and an Alexa Sandman ace.
A dominant streak of four kills and an ace gave the Broncos 8-5 in the second set.
The Raiders erased a four point deficit and the set went back-and-forth. Overall there were 10 ties in the set. The Broncos trailed 18-22 until a kill by Peyton Cox and two ace serves from A. Sandman tied the game at 22. After a Raider kill, Yearous tied the game at 23. Medicine Valley had set point, 23-24, but couldn’t finish off WP. The Broncos earned set point with a kill and ace serve from Yearous. An MV attack error gave WP the 26-24 win.
A block by Yearous, two kills from GraCee Goings, plus a kill from P. Cox, opened up a 12-5 advantage for the Broncos in the third set. WP was dominant in the 25-11 win and finished off the Raiders with a kill and ace from Haylee Sandman and kill by P. Cox.