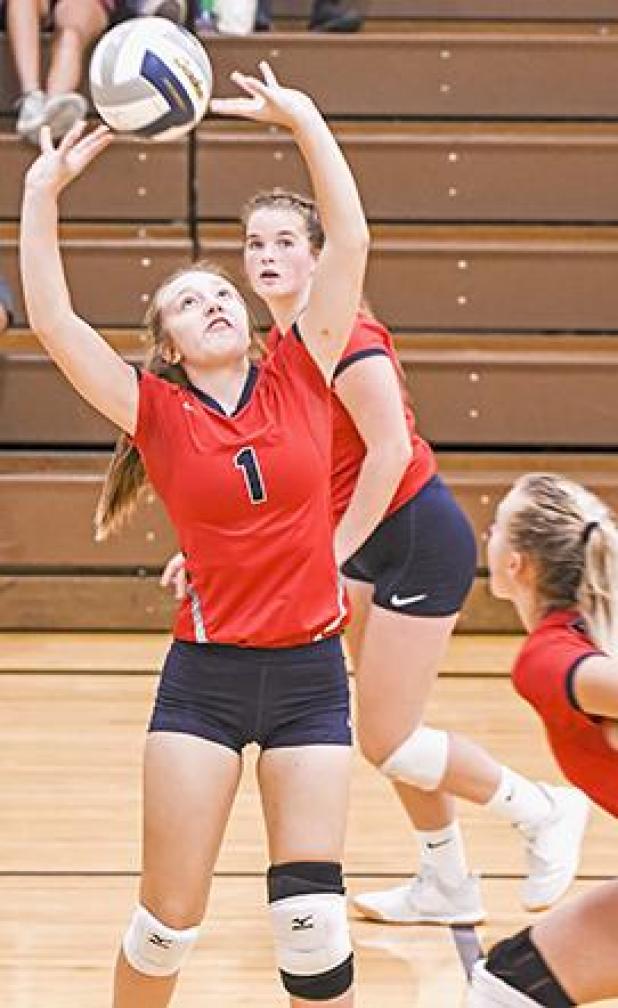 Halle Bardsley (1) came off the bench and served a perfect 26-26 with three aces during the Hitchcock County Tournament.

Lady Broncos 4-4 with one game on tap this week

With five games on its schedule, it was a busy week for the Wauneta-Palisade volleyball team.
The team traveled to St. Francis, Kansas, Thursday for a triangular with the Indians and Rawlins County, Kansas.
Saturday the Broncos went 1-2 at the Hitchcock County Tournament.
WP opened the Kansas triangular with a 25-27, 15-25 loss to St. Francis.
The Broncos rebounded with a 25-22, 25-20 win over Rawlins County. Haylee Sandman had 11 kills and five aces for WP. Payton Yearous and GraCee Goings each had three kills. Cali Cox had 17 assists
WP drew the tougher of the two pools at the Hitchcock County Tournament. Playing in Culbertson, the Broncos lost to undefeated Maywood/Hayes Center 15-25, 18-25 to open the day.
Following MHC’s defeat of Axtell, WP took on the Wildcats.
Tied at 8-8, WP watched Axtell (7-3) make a five-point run. The Broncos were unable to make up the difference and lost the first set 19-25.
WP trailed by as many as seven points in the second set.
Trailing 9-16, the Broncos took advantage of Axtell attack errors to close the gap to 13-16. Axtell stretched its lead to six points, 16-22, before two kills by H. Sandman and an Axtell attack error brought WP to within one point, 22-23.
After being called for two hits, WP held off two match points to tie the game at 24 with Halle Bardsley serving. A block by H. Sandman gave WP its first lead set, before an Axtell error gave the Broncos the set, 26-24.
WP couldn’t carry the momentum into the third set, however. Two early kills by Peyton Cox helped WP to the early lead.
The Broncos held their last lead at 14-12. Axtell took control of the net with seven kills and two blocks, leaving WP trailing 15-24. The Broncos lost the set 17-25.
H.Sandman led WP with seven kills. C. Cox had nine assists and P. Cox had eight. Bardsley added five assists, plus was 15-15 serving with two aces. Alexa Sandman nailed all 11 serve attempts with one ace.
WP dominated Arapahoe (2-6) in the fifth place game.
Playing libero, Alexa Sandman served WP to a 7-1 lead. WP closed out the set with Bardsley serving and H. Sandman in the front row. H. Sandman had three kills and a block to finish off the first set 25-12.