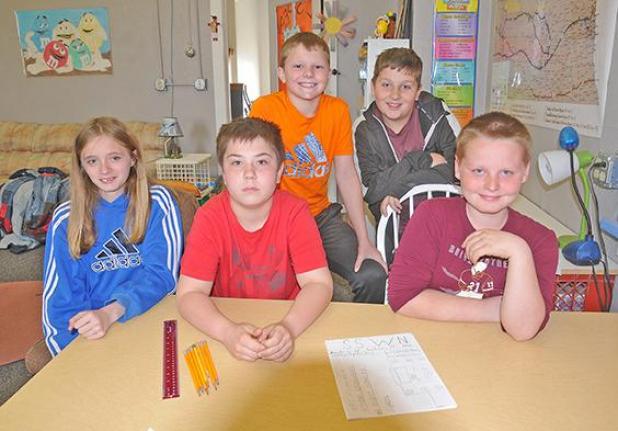 By Tom Pantera The Wauneta Breeze

If you want to keep up on the doings at the elementary school in Palisade, you have a new way to do that.
A half-dozen students in Jennifer DeWester’s fourth-grade class have begun putting out a school paper, the School Student Weekly News.
The staff is made up of Aiden Wheeler, Abby Blackman, Kameron Jutten, Ayden Baker, Kaden Shifflet and Jackson Wessels.
The paper put out its first issue just last week, and staff members plan to publish weekly, with a press run (actually a copier run) of about 100 copies, which will go in the school’s classrooms.
Perhaps unsurprisingly, the idea for a school paper came from the students’ fondness for a regular feature in other papers.
“We like drawing comics,” Jutten said. In fact, they started doing that a couple of years ago, then this year they asked Principal Joseph Frecks if they should make them part of a newspaper. After brainstorming some content ideas, they put out their first issue.
As with any new publication, there were some production hiccups. “Our lunch menu got ruined because the company that brought us the food didn’t do it,” Jutten said.
But they were able to produce a six-page issue with a menu, plus a joke of the week, suggestions on what to do in physical education and music classes, those comics and a prediction that by the end of the week students will be reading Dr. Seuss.
The students have divided up the different sections of the paper, with Wessels becoming the overall editor.
The kids came to journalism through different routes. Baker began reading the newspaper after a family of snowmen built by his family made the front page of the Breeze. Shifflet’s father is a county commissioner and often makes the news, he said, so he’s become interested in reading it. Blackman started reading the papers sold at her mother’s Palisade store, Sodtown Sundries.