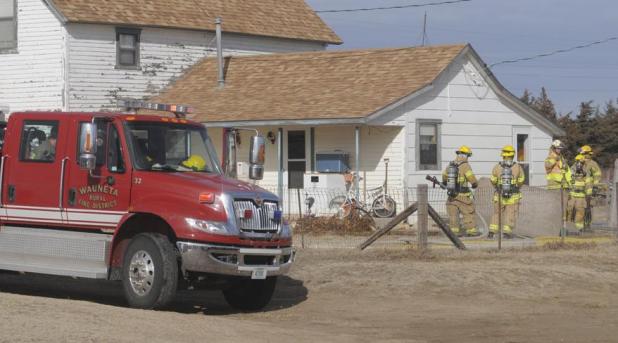 Firefighters from Imperial and Wauneta responded to a Saturday morning fire at the Wayne Bartels home, south of Enders. The fire was contained to a small section on the home’s north side.

Firefighters from the Imperial and Wauneta volunteer departments responded to a mid-morning fire Saturday at the rural Wayne Bartels farm home.

Imperial Fire Chief Doug Mitchell said the fire was contained to an estimated three by four foot section of the home’s north wall, which had then burned through the studs and inside wall.

Imperial’s quick attack unit was first on the scene after the 9:30 a.m. call and extinguished the flame quickly, Mitchell said. Smoke had filled the home including the basement.

Firefighters donned self-contained breathing apparatuses (SCBAs) and did a full check indoors with the thermal imaging camera to confirm no other fire was present, he said.

No other issues were found, he said.

Apparently, Bartels had been attempting to thaw out an above-ground drain pipe outdoors that had frozen when the fire started, Mitchell said.

Later Saturday, the IVFD brought out a pair of smoke detectors to be installed in the home.