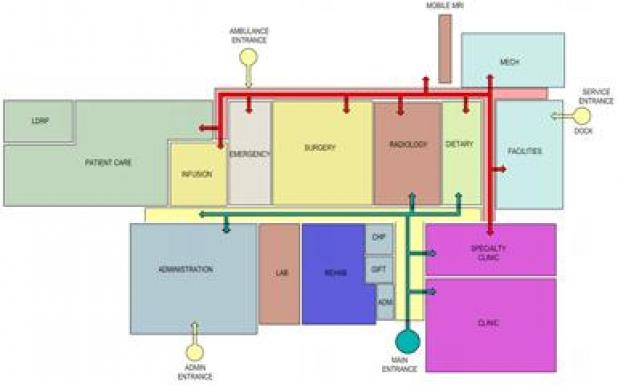 One of the key features of the new design would be public traffic patterns and back-of-house traffic patterns. The allows staff to move patients throughout the hospital to various departments without exposure to the public.

By Russ Pankonin The Wauneta Breeze

Hospital board members favor exploring options on building a new facility versus remodeling and expanding the existing facility.
During their April board meeting Thursday, April 27, members of the Chase County Community Hospital board voted unanimously to go to the next phase towards building a new facility.
Their decision was merely to explore the next phase of a new facility, not a vote to proceed with a new hospital.
The board heard the final report from the ERDMAN Company of Westminster, Colo., on a $54,000 study to develop a strategic campus master plan.
The final report completed a study that began in December 2016. The company completed a discovery process with staff and community members, a comprehensive market analysis of health care and a space analysis to develop their final report.
The board learned a remodel and expansion project was estimated to cost $2.37 million more than a new facility. The cost for a new facility was estimated at $22 million.

Remodel versus new build
ERDMAN presented the two options during last week’s meeting—remodel and expand the current facility versus a new build option at a new location.
The study explored the pros and cons for each option, planning and construction time lines, as well as cost estimates for both options.

Remodel and expand
The remodel option would be a four-phase project with 23,000 square feet of new construction and remodeling of the existing 39,000 square foot building.
Time line for the project would span almost 3.5 years with completion near the end of 2020.
The first phase would include building the new expansion. The expansion would include a new entrance and lobby on the east side of the hospital.