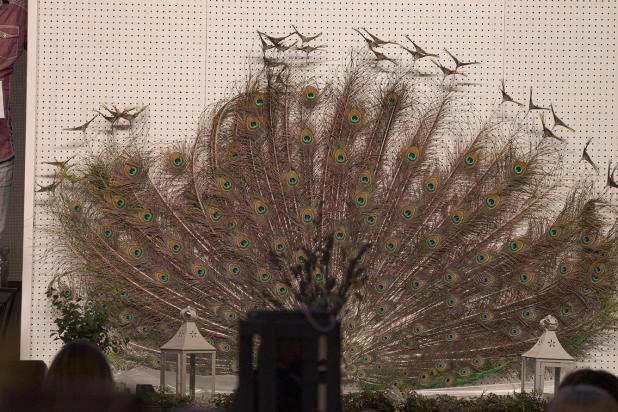 Charlie the Peacock’s feathers went through at least five rounds of bids before eventually raising more than $5,000.

Ruth Petsch of Wauneta lost an old friend early last year, but found a fitting way to memorialize him.
Charlie the peacock died early in 2018, after years of hanging around Petsch’s home. Petsch, 80, donated his last set of tail feathers to the live auction at the Cattlemen’s Ball, where it was put on the block as a surprise item.
Ball Treasurer Joey Large is still totaling up the bids, but estimates the tail feathers, which filled most of a 5 foot, 8 inch-by-8 foot inch frame, brought in at least $5,000 in five rounds of bids; winning bidders repeatedly turned it back to be re-auctioned before finally be donating to McCook Community Hospital.
The sale was the last act of a six-year friendship.
Charlie apparently escaped from the west side of town, made his way to the east side, near Petsch’s home, where he attached himself to a flock of wild turkeys.
Petsch took something of a shine to the bird. He’d dig into the seed she left for other birds, and, since he was sort of a big, hungry guy, she would sneak him a little extra.